Meeka Ward Neufeld made his appearance in the wee hours of the morning (1:33 to be exact) on August 26th after 26ish hours of labour! When I got a chance to pop in for a short visit an hour later my brother, Tim, looked positively exhausted and his wife, Amber, looked radiant! Both had the tired but clearly joyful looks of new parenthood plastered on their faces and both proudly watched as their newborn son was passed eagerly around the room! I know it sounds kind of poetic doesn’t it!? But really what else could it be when the miracle of new life emerges into the waiting arms of two loving people and an extended family ready to embrace all that this little person has to offer.

The months that lead up to this much anticipated moment are surely well worth the wait. With comments from the young cousins about when baby Meeka comes…how much longer until baby Meeka comes…will baby Meeka be born soon…and on and on it goes. When we told the kids auntie Amber was not feeling well and it probably meant baby Meeka would be coming soon they eagerly joined me in praying for a safe, quick arrival. Although as a mother I knew the hardwork ahead I also wished all the best and shortest possible amount of pain to my wonderful sister-in-law. Once Meeka was born I jumped out of bed to dress and make the short trek to Langley hospital and visit my brand new nephew. Later that evening the rest of the family joined me on a return adventure to hold, snuggle, and kiss this new little man in their lives.

Upon entering the hospital Jake informed me that, “we’ve never had a cousin before”, Lanae told me, “Baby Meeka’s my friend mommy and I’m going to help change his diaper because I’m a big girl” and Sam quietly strolled along until we reached the designated room. Upon arrival baby Meeka was finishing his dinner and of course being the knowledgeable older brother, Sam kept his distance but Lanae had no qualms peeking under the receiving blanket looking for Meeka and checking out every part she could actually see. When Meeka was ready to emerge Sam waited with eager arms to hold him for the first time. After about an hour the kids were clearly eager to get out of the small space. We headed home with each talking about how cool it was to have a cousin. Sam was sure he would be baby-sitting soon and Jake couldn’t quite grasp how come baby Meeka was so small in comparison to baby Annie (who now seems like a giant)! All in all it’s been a great experience so far and I pray the best possible transition over the next few weeks for Tim and Amber! 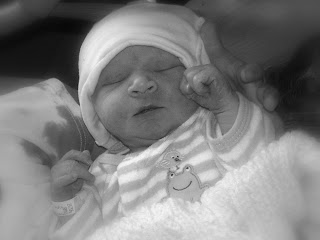 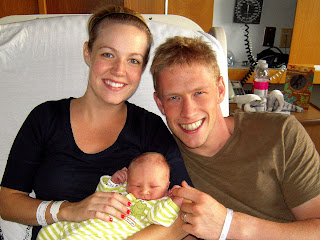 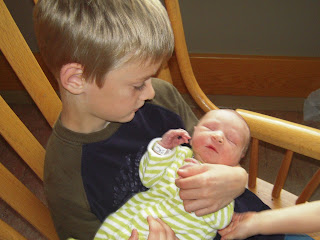 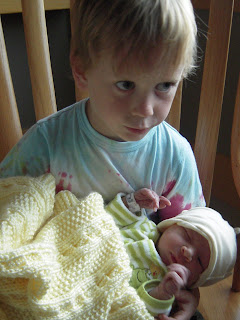 4 thoughts on “The Newest member of the Neufeld clan”