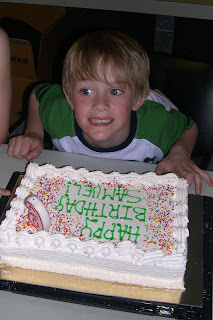 This year Sam suggested we take his party to Galaxy Bowl for some good, old-fashioned bowling. Sam probably had the most fun and although the other kids did enjoy themselves they probably weren’t as exciting about Sam’s birthday as he was but that’s the whole point right! Anyway, here they are festivally celebrating a great friend. 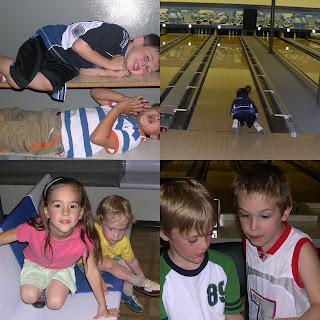 The boys are absolutely loving this amazing weather. Although it’s scary to think that all this hot weather could lead to a flood in the Lower Mainland I have to say that I really enjoy sitting outside and soaking in the rays. Somehow it lifts my spirit immeasurably to look outside and see such beauty and light. I am so thankful that we have such a great backyard and that we have good neighbors who play well with my kids.

The boys both have a pair of soccer cleats now (Sam’s were new from Grandma & Grandpa for his birthday this year and Jake’s are an old pair of Sam’s that Grandma purchased when Sam was 3 or 4 in hopes of him starting soccer). It’s the cutest thing to watch Jakie chase after Sam and when they play together it is completely heartwarming. 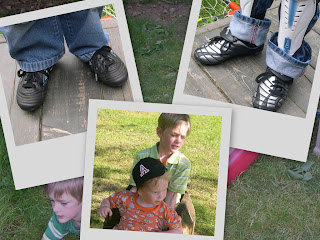 Here is my 6 year old son!! How did I get to have a little boy who is that old? Sam is a joy to have. He loves sports, in fact there is not a day that goes by that he hasn’t been involved in some sort of athletic activity. Right now he is participating in t-ball and will soon be playing soccer (which I plan to coach). I’m thoroughly enjoying this stage of life despite the busyness of it. I feel like this is what I’ve been waiting my whole life for. I am truly blessed and everyday with this precious child reminds how incredible life is. 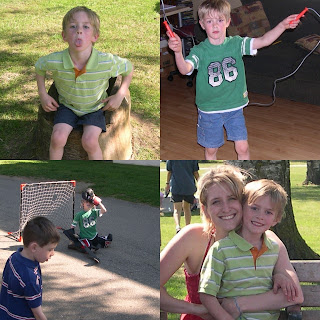 So since Spring has arrived in full swing I feel like I only have a few minutes in a day to catch my breath. Although I am absolutely loving this stage of life with my children I can’t begin to describe how all-consuming it is. Those of you who have children understand and those of you who have yet to experience this joy will find it fully captivating when the time comes. I love that Sam is learning so much at school and getting involved in extra curricular activities. He started T-ball in May and although it’s not as “intense” as he might appreciate he is learning the art of sportsmanship. Jake thoroughly enjoys attending Sam’s t-ball games and always wants to wear his hat and shirt as well. Often he does the “base race” with Sam when the teams have finished their game and I have to say he’s quite the little mascot. Sam will also be starting soccer soon which I imagine will be tough for Jake to watch and not participate but his turn will come soon enough. Having said that they both have a pair of soccer cleats since Grandma & Grandpa were gracious enough to supply Sam with a small pair when he was 4 that now fit Jake and buy a pair for Sam this coming season for his 6th birthday.

Jake is also in swimming lessons but I have yet to capture his moments of glory on camera so I’ll be sure to post them when I do.

One of the boys all-time favorite things about this time of year is that they get to spend hours outside in the front playing street hockey with friends. James and I purchased a goalie mask for Sam’s birthday to complete Sam’s ensemble of goalie equipment and it is a definite hit with all the little boys.

Aaaaahhh, life is so good right now and I am truly cherishing every bit of it. 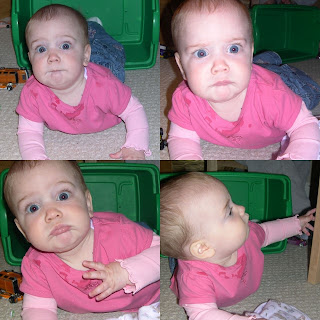 Here she is Miss Canada… Okay maybe not but she is practising her wave. I can’t believe my little girl is almost 7 months. She has become quite a little mover and shaker. Over the last week she has learned to wave (as shown in the picture, it is the progression of a wave anyway since it doesn’t happen very quickly) and she has learned how to get around. She’s not crawling but as you’ll see in the preceding group of pictures she can “commando” crawl by using her forearms to pull her body forward. Anyway, she’s a sweet little girl and very content!

This morning Jake wanted to use Lanae’s tea set that Grandpa and Grandma got her for Christmas. we set up the teddy bears and had a blast serving “tea” and “biscuits”. Oh the joys! 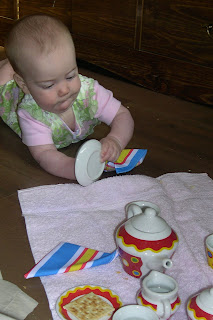 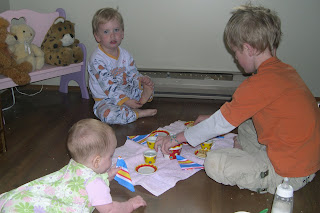 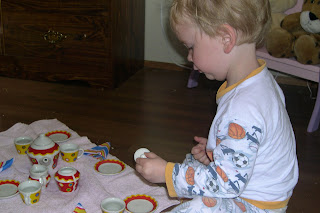 I had a great weekend starting off with the Aquarium on Saturday. On sunday after church we heading to Mom & Dad Neufeld’s house for lunch. Mom made some great lettuce wraps that I’m going to have get the recipe for. 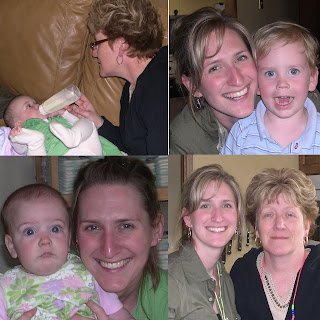 Then for dinner we had Mom and Dad Davenport over and James made salmon and rice with vegetables. I got a Siamese fighting fish from Sam, Jake and Lanae for my gift and James got me a beautiful potted plant with a calla lily (my favorite flower). I even managed to get in a few pictures this weekend! 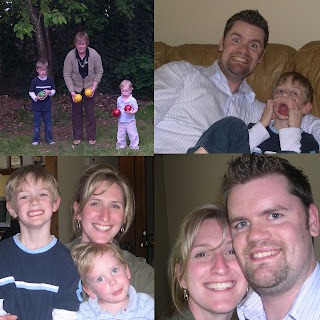 So getting to what we’ve been up to lately! We went to the Vancouver Aquarium today because haven’t been for awhile and really needed to do something fun together as a family. We went with some family friends and had an absolute blast. We will definitely make a habit of doing that maybe once every year or two.

Sam said he loved the “baby belugas” and Jake said he liked it when the belugas “spit” on the little girl.

They both were fascinated by every tank and couldn’t stand still for more than few seconds at every one. Lanae was amazing and really only fussed for a few minutes here and there when she would normally have been napping. She eventually fell asleep in her backpack twice but neither were very long naps. Needless to say everyone was very exhausted when we got home.

Before I share what we’ve been up to lately I had to share a few fun pictures for the benefit of those whom have not seen the kids recently.

The first few are of Lanae. She’s getting so big and is very busy. She’s eating solids and taking a bottle. I’m pretty sure she’s going to be crawling soon as she manages to roll all around a room when she wants to get going and just recently has tried to get up on all fours. She’s not sitting on her own yet but I’m sure that will follow shortly.

There’s also a few pictures of Jacob! He’s a fun kid! Sometimes a ham, sometimes a mama’s boy. We’re not always sure when the mood will strike. For now he loves following his big brother around especially at baseball.

Finally a few of Sam! He’s getting huge and nearly finished kindergarten. I can’t believe next year he’ll be starting grade 1 (eeeekkk). Where does the time go. Anyway for now he’s doing T-ball and will be starting soccer at the beginning of July. He loves sports and is very adept at them as well. There isn’t a day that goes by that he’s off doing sports in some way or another.

Okay I’ve been harassed enough by my friend Christa to start this blog so here goes. I figured I could probaby use it to keep all my out of town relatives updated on the happenings of the Davenport household without having to send a mass amount of pictures. Hopefully you all enjoy this and have a chance to see our beautiful family as they grow!