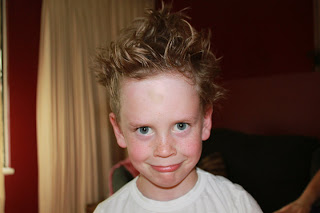 I’m pretty sure the face on the left says all it needs to say about why I would title a blog like this but I really have to share the dialogue of my almost six year old if for nothing else than to have a permanent record of it.

Jake had been having a few behavioral issues the last two weeks of school. Mostly just goofing around and being ready for the end of the school year. We have an incredibly understanding kindergarten teacher and she has walked both our boys through their first year of school with such grace and care but I have to say that if I had been in her position the last few days of school I would have found it difficult to display such composure as she when she informed me that my son had decided he couldn’t wait to use the bathroom.

A boy in his class found him peeing in the bushes and decided to join him. Shortly after that a few classmates found him and “reported” his rather unsavory behavior to the teacher. Needless to say her first response was to get quite angry (rather reasonable if you ask me) but then she decided to talk to the boys and determine if this was behavior that was considered acceptable at home.

“Jake, are you allowed to pee in the trees at home,” asks the teacher? “No, but sometimes I do and my mom doesn’t know because there isn’t anyone there to tell on me”, he replies.

Of course he’s informed that kids aren’t allowed to pee in the bushes at school even if the teachers don’t know about it and the message is relayed home that perhaps we should talk about it. Now we had conversed with Jake already that anymore unacceptable incidents at school would result in consequences at home but I wasn’t really sure exactly what would be appropriate in this case. James was quick to the rescue suggesting he write a note apologizing and giving two good reasons why he shouldn’t do that again. So here is what he wrote:

I am sorry that I was peeing in the trees. I know that pee belongs in the toilet and that someone could step in it. Please forgive me.

It was priceless and Mrs. T. was quite impressed with his neat printing, spacing and great spelling so she gladly accepted his apology.

Fast-forward to Tuesday afternoon after I picked the kids up from Nana’s house. This is how the conversation went:

Me: “Jake, I talked to Mrs. Thiessen and she said you had a great day today. I am very proud of you that you gave her the letter and didn’t have any problems today at school.”

Jake: “It was a good day mom (Pause) well, there was one incident…I kicked a girl.”

Me: “Jake, why would you do such a thing? That isn’t very kind.”

Jake: “I know mom, but she wanted to fight me.”

Me: “What do you mean she wanted to fight you, why would she want to do that?”

Jake: “Well, she walked up to me and she JUST, looked like she wanted to fight so I kicked her.”

At this point I’m trying not to laugh because really how can a parent not find it somewhat amusing when children are so matter-of-fact about their behavior. As a parent trying to raise healthy, well-behaved children it can be difficult to find the balance between letting kids be kids and experiencing natural consequences and setting boundaries that will help them establish the difference between right and wrong in their minds.

Really this was just a funny illustration of how teachable moments invade everyday of our lives as parents. We can choose to embrace them when our children are young and give them a good solid start or we can let them just “be kids” and flounder through many difficult trials as they head into adolescence.

3 thoughts on “Peeing in the bush”